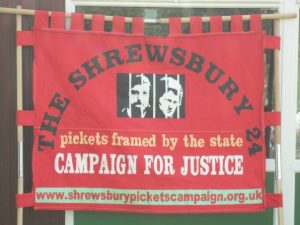 A Liverpool man who struggled to find work in the building trade has unearthed files showing he was first blacklisted 50 years ago.

Mike Abbott, 74, found the first entry on his blacklisting file dated back to his work on the construction of the Fiddlers’ Ferry power station in 1964.

He believes the file on him was started because of his trade union activities and also the fact he raised health and safety concerns at sites.

Entries on the file include one from 1974 which mentions his support for the jailed Shrewsbury Pickets – including Ricky Tomlinson and Des Warren – while one claims he was one of the leaders of a North Sea oil workers’ strike in 1979.

The entry states: “This man is at Sullom Voe, Shetlands, he is one of the leaders of the North Sea off shore strike. There are 7,000 men out on strike.”

But the first listing dates back 15 years earlier, during the time he was building the power station, which he said was dangerous work.

Mr Abbott said: “I started on the Monday morning and the guy who was in charge said to us he wouldn’t take his lads up on the wet steel.

“At about 10.30am that morning an old man about 62, a steel erector, came hurtling down and was impaled on the steel barriers.

“We were always having to fight for safer conditions in the construction industry.”

Mr Abbott, who is suffering from cancer, said it had been impossible to find lasting work in the building trade over the last 50 years, but that there was a chance he would miss out on the compensation pot being paid into by the big construction firms.

He is one of thousands of men around the UK who were denied work on building sites over the years, but because he stopped trying to get jobs on sites and went self-employed in the 1980s he may not be classed as having been ‘looking for work’ with the firms during that time, and so may not be eligible.

But he has been on the list longing than any other construction worker alive today.

A key anti-blacklist campaigner, he was in court in 2009 for the conviction of illegal blacklist compiler Ian Kerr, who was arrested after a raid by the

Information Commissioner on his company, the Consulting Association.

Ricky Tomlinson speaking on his continued fight for justice

2012 will see the Olympics coming to London. I was lucky enough to work on the Olympic stadium, which will be
the first to be completed without a single loss of life.

The way in which this was achieved was management not being afraid to work closely with employees and employees
taking ownership of their and others health and safety and also management continuously looking for new ideas to
create a safer place of work.

I was introduced to Team Stadium and thought ‘here we go again’, but boy was I wrong. They involved me from
day one and I really enjoyed working alongside the management team. I will always feel proud of working with a great
set of boys and management.

2012 will see 40 years since the great national construction strike where 24 construction workers were held on a trumped up charge, where 2 spent over 2 years in prison and sadly one died because of the liquid cosh given to him to help him sleep during his time in incarceration.

This cannot continue for another 40 yrs. The state is withholding evidence because of national security which can cover anything from informers to the involvement of the government, police or MI5. The government made a statement
that they will not release evidence about Jack the Ripper 123 yrs on to protect living relatives of informers, so will they
hide behind this to continue to withhold evidence against the Shrewsbury 24.

2012 will see the continuing deaths on our construction sites, where we have averaged more deaths than our army fighting 3 wars over the past 10 yrs and not once have I seen our unlucky workers draped in the union jack. No one is more proud of our army than I am but I am equally proud of our construction workers.

Lately deaths are down to 50 a year and some say it’s because standards are getting better, some because we are in the middle of a recession. The truth is 50 is 50 too many and if we complete the Olympics without a single loss of life it
will prove we can build using 16000 (including the Olympic Village) workers in a area approximately 7 sq miles building complex stadiums and blocks of flats, we should be able to build anything anywhere without deaths.

That this House recalls the national trade union building workers strike of 1972 and the subsequent arrest a year later of 24 pickets, the sentences handed to six of them, and the long imprisonment served by Des Warren and Ricky Tomlinson; notes the legacy in the construction industry since the 1972 strike, including an unregulated industry, increasing casualisation through bogus self-employment, an appalling accident and death rate and renewed blacklisting of workers, as was the case after the 1972 dispute; and supports the campaign by the Trades Union Congress, Unite and the Union of Construction, Allied Trades and Technicians, for the Home Secretary to release all secret papers related to the Shrewsbury case and to instigate a public inquiry. Signatures (44)

Cruddas, Jon / Morris, Grahame M
The above EDM can be viewed at –

THIS IS A LETTER WE HAVE SENT TO VARIOUS MP’s. PLEASE COPY/PASTE IT AND SEND IT YOUR MP IF HE/SHE IS NOT ON THE LIST ABOVE.

I am writing to you as a member of The London Justice for Shrewsbury Pickets Committee. It was great to see the
out come of The Bloody Sunday inquiry.

However what we are failing to understand is how all the information concerning the above is now in the public
domain as compared to the Shrewsbury pickets during the same time these striking pickets in 1972 were placed
on trial and despite the 30 year ruling being applicable via the freedom of information act, the papers surrounding
the events are not available in their entirety due to national security.

What we as a committee are struggling to comprehend, is how the documents of the 24 pickets can be held
due to national security when a massacre of 14 civilians and the injury of a further 13 is not considered to be
damaging to the country or national security?

The same Governments involvement in the 1972 Claudy bombing where it as been proved they conspired with
the police to hide evidence about the involvement of Father James Chesney who himself conspired to kill 9 (3 kids)
plus injured 30. Again paper work involved with this case has been released (national security).

We would also like to bring to your attention, the release of Abdelbaset Al-Magrahi (Lockerbie Bomber) on
compassionate grounds after the murder of 270 victims (31 British) and the comparison with the Shrewsbury
picket Des Warren who died as a direct result of his imprisonment who personally murdered or injured nobody.
Where is the compassion for our Des and his family?

What we are asking for is a total release of all documents pertaining to the arrest and trial of the 24 and a
public inquiry which would not cost a fraction of The Bloody Sunday inquiry.

There are numerous discrepancies contained within the trial of the pickets and the roll of the state played within it,
which echoes Ulster.

Your thoughts and opinions regarding the above would be welcome.

Just to finish I wish to add we have received letters of support from Lord Kinnock, Charles Kennedy and a number
of other MP’s.

We would be grateful for your support this time around as we were last time. Thank you for signing the
Shrewsbury EDM 310 the previous time.

The film shows footage of the arrest of 24 pickets several months later in 1973, the sentence of 6 trade unionists
including Des Warren who served 3 years and actor Ricky Tomlinson, who before his acting career was sentenced
to 2 years in prison on jumped up conspiracy laws. After nearly 40 years, the campaign continues to seek justice.

There were guest speakers at this Christmas social event including, Frank Morris from the electricians Rank & File
campaign. The electricians, or sparks as they are known, have recently taken strike action over seven rogue
construction companies who have walked away from the negotiated Joint Industry Board (JIB) agreement
in a provocative move to deskill the electrical craft and cutback on wages. The dispute is currently ongoing,
and may see further industrial action throughout the country.

The highlight came at the end of the evening when Tony O’Brien presented Mick Holder; a former campaigner
at the London hazards centre a Robert Tressell award for his campaign work on safety. The award is named after
that classic book the Ragged Trousered Philanthropists, first awarded to Des Warren in 2004 shortly before he died.
The Shrewsbury campaign was relaunched shortly after Des’s death as the Home Office refused to hand all the
papers related to this atrocious miscarriage of justice on the grounds of “national security”. 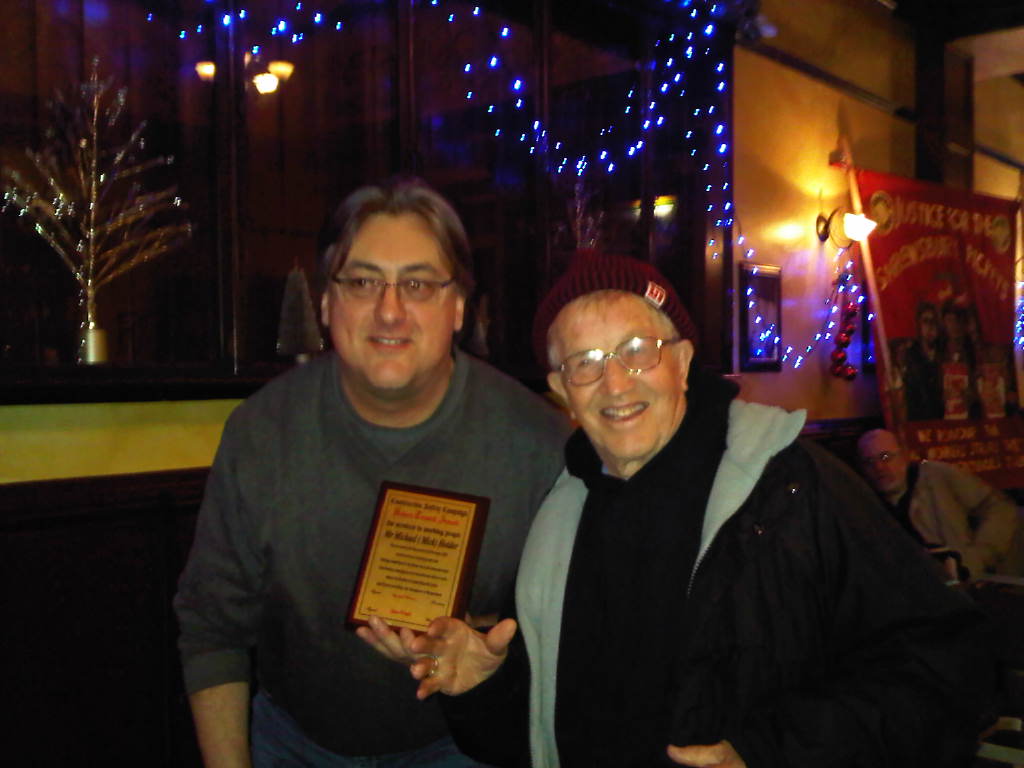 Also present was veteran Trade Unionist, home from Ireland Tommy Finn who received a round of applause as
he thanked the Justice for Shrewsbury campaign for an excellent film night at the Twelve Pins pub, in Finsbury Park.

The 40 minute DVD is available for £5 and can be obtained by contacting Mick at Islington Trades Union Council – 07817254851.
The campaign can be contacted through Steve Ballard – 0798786399.
Further information from www.shrewsburypicketscampaign.org.uk

We plan to show the film at other London venues throughout 2012.