I am the website editor of the London Shrewsbury Defence Committee and will be writing up on Blacklisting.

I am the Branch Secretary of Basildon Trade Union branch. I am a Safety Advisor/Union steward working at Heathorw Terminal 2. I have worked in construction/railways for 10 years.

I am an NVQ Assessor (General Construction and Waste Management). I have an NVQ Level 2 in Waste Management. I am an IIF (Incident & Injury Free) presenter. I have 9 GCSE’s and 3 A-Levels. I am a qualified Safety Rep (Construction). I hold a NEBOSH General Certificate (Credit) and I am currently completing an NVQ Level 4 in Occupational Health & Safety. I am the Chairman of the Site Wide Safety Committee on site and I am also a qualified rugby referee. 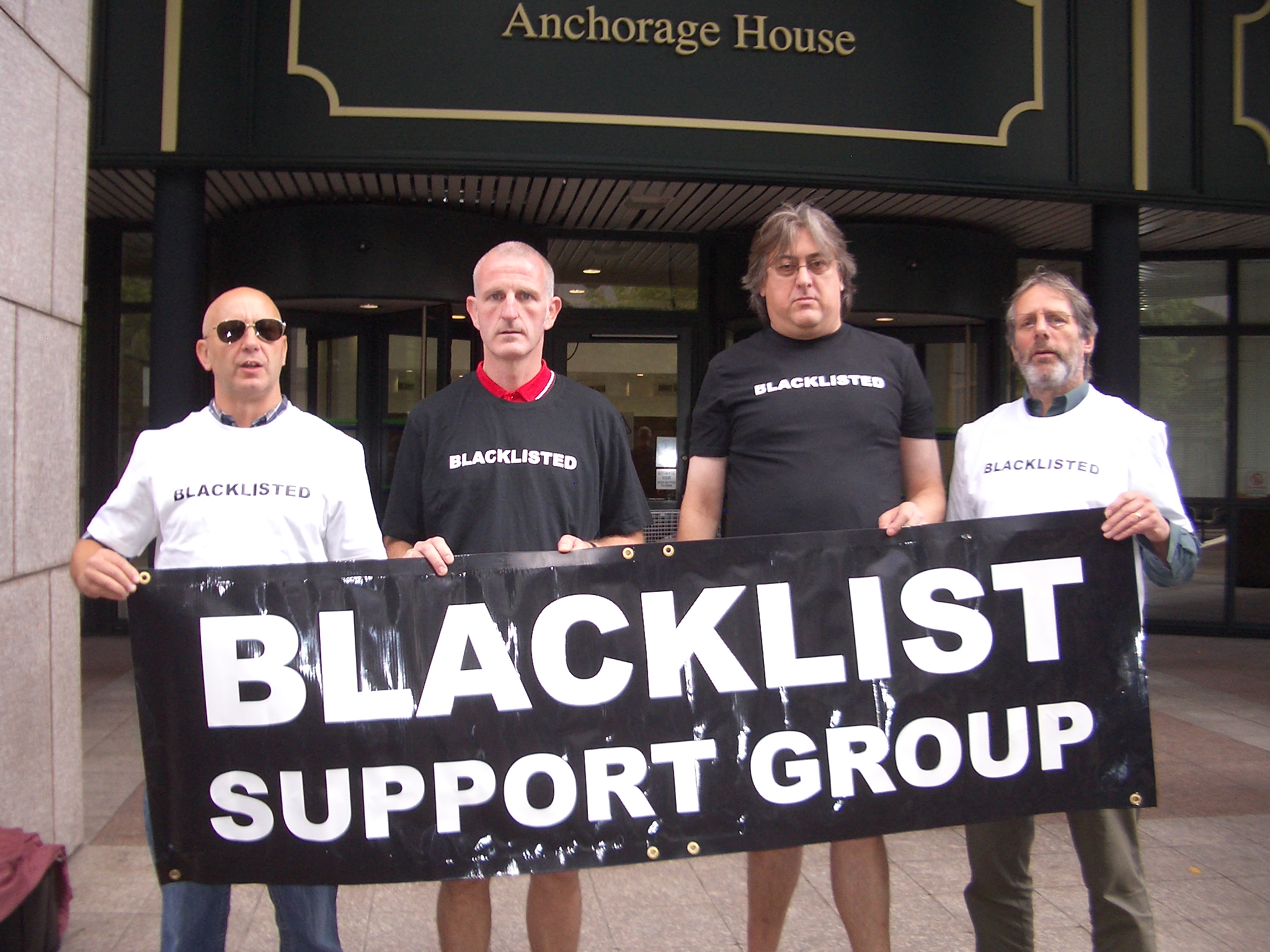 Steve Kelly (2nd from left) outside his pre-hearing for his Blacklisting trial.

Over 40 well known companies such as Balfour Kilpatrick, Crown House, AMEC, Costain and Wimpey were using the services of Ian Kerr Associates. This toe rag of an individual provided any company who contacted him with names of so called trouble makers and ex shop stewards. Steve Acheson, an electrician from Manchester, has only worked for 36 weeks in the last 9 years due to being on the blacklist. Many other workers have also been affected. The blacklist can ruin peoples’ lives, affecting all family members, forcing them into extreme poverty and serious debt. Many have lost their homes and marriages have broken up.

The unions must be applauded for lobbying MPs and Parliament, but the real heroes are the rank and file and the working class.

These people suffered greatly due to the capitalist bosses’ greed and their exploitation of workers. The working class always suffers in the class struggle against the bosses who detest us, especially when we organise into unions and take them on. We must never give up the fight. They offer us crumbs, we demand bread and roses.

The unions must now pursue this further and ensure that Ian Kerr is prosecuted for his crimes.

Workers who have been unemployed for long periods should be compensated.

The rank and file must keep up the pressure on their unions and take action wherever the blacklist is being used. It will not go away. Fight for your class. It’s a major battle ahead which can be won providing all workers are united in defeating the bosses to bring an end to exploitation of workers once and for all, and a fair and equal workplace in construction as well as other industries.