I am now a retired teacher, having been an active socialist and trade unionist all my adult life.
I am the Treasurer for the London Shrewsbury Defence Committee and I will be writing up on the Defend Trade Unions section of the website. I have been part of the campaign for justice for the Shrewsbury pickets since 1972. I am still active in the NUT, the National Shop Stewards Network, and Defend Haringey Health Services. I am a member of the United Socialist Party.

The Justice for Shrewsbury Pickets Campaign has lost its founder and most lion-hearted champion. Mike re-kindled the campaign from dormancy when he retired in 2006, just as he promised Des Warren he would, when Des was dying from drug-induced Parkinson’s disease in 2004. For the first 5 years, the high profile that the campaign rapidly achieved was entirely down to Mike, who travelled the length and breadth of the country to build support. The intention was to persuade the TUC to organise a public inquiry to learn from the experience and overturn the 1970s criminalisation of mobilising solidarity action.

The campaign quickly became very popular, with a network of supporting organisations and individuals, all looking for a way to unite today’s campaigns against collective injustice with the unresolved issues from 1972 – casualisation, bogus self-employment, blacklisting of activists, poor H&S standards and inspection, and the behind-the-scenes ‘nod and a wink’ collaboration of employers, Tories, senior media, judiciary and police officials to prejudice public opinion against trade unionism. Wherever we went for support, it was forthcoming.

The campaign would not be where it is now without the National Committee that Mike recruited. He constantly reminded activists of Des’s statement from the dock, just before he was sent down for 3 years for conspiracy:- “Nobody here must think they can walk away from this court and forget what has happened here. Villains or victims, we are all part of something much bigger than this trial. The working class movement cannot allow this verdict to go unchallenged. It is yet one more step along the road to fascism and I would remind you — the greatest heroes in Nazi Germany were those who challenged the law when it was used as a political weapon by government acting for a minority of greedy, evil men.”
The National Committee organised a lobby of parliament, 2 Early Day Motions, fringe meetings at UCATT, TUC and Labour Party conferences; we lobbied traded union leaders and Brendan Barber; we produced a DVD with Platform Films which has been shown all over the country; we have spoken at numerous trades councils. We campaigned for both the hugely successful annual Shrewsbury Pickets marches, in Shrewsbury organised by Telford and Shropshire TUC.
In the summer of 2010, out of nowhere, some members from the North West began to divide the campaign, insisting that the only campaigning they would do was to seek legal redress for the 24 convicted pickets. Legal redress was not on the campaign agenda until convicted picket Arthur Murray requested it, and since then nobody opposed it. Walking away from the National Committee will not overcome the criminalisation of mobilising solidarity action.
Unlike Mike and others of his generation, today’s young activists have no experience of the mounting world-wide optimism and strength of the struggle for socialism in the 60s and early 70s. And they have no other trade union organisation which is trying to develop their understanding of how that optimism and strength arose and was subsequently undermined. It was undermined by the unprincipled manoeuvring of all manner of left-talking people and organisations, not just the official leaders of the Labour Party and the trade unions. These left-talkers blocked the mobilisation of solidarity action that could have prevented the criminalisation of trade unionism 40 years ago, just as the mobilisation of solidarity action brought down the Heath government and forced the release of the Pentonville dockers. Instead, the solidarity of the 1970s was broken down using the same unprincipled tactics that were used against the National Committee — dividing the different mobilisations against collective injustice instead of uniting them, by claiming they are not part of the struggle for socialism.
Mike continued to be active, turning out and speaking up for every mobilisation against collective injustice, until he was put on palliative care at the beginning of February. He went on cheerfully talking and joking right to the end, with barely a moment’s self-pity, despite the excruciating side-effects of the 3 courses of chemotherapy he endured over 3 years, until the doctors could do no more. Mike’s determination, integrity and fortitude are beyond question, a blazing beacon to all who knew him, just like Des Warren’s. Des refused to allow himself to be called a hero, and Mike felt the same. Nevertheless, all those young activists who take up the struggle against collective injustice will honour people like them, and be inspired by the qualities of unyielding principle and self-sacrifice that they embodied. 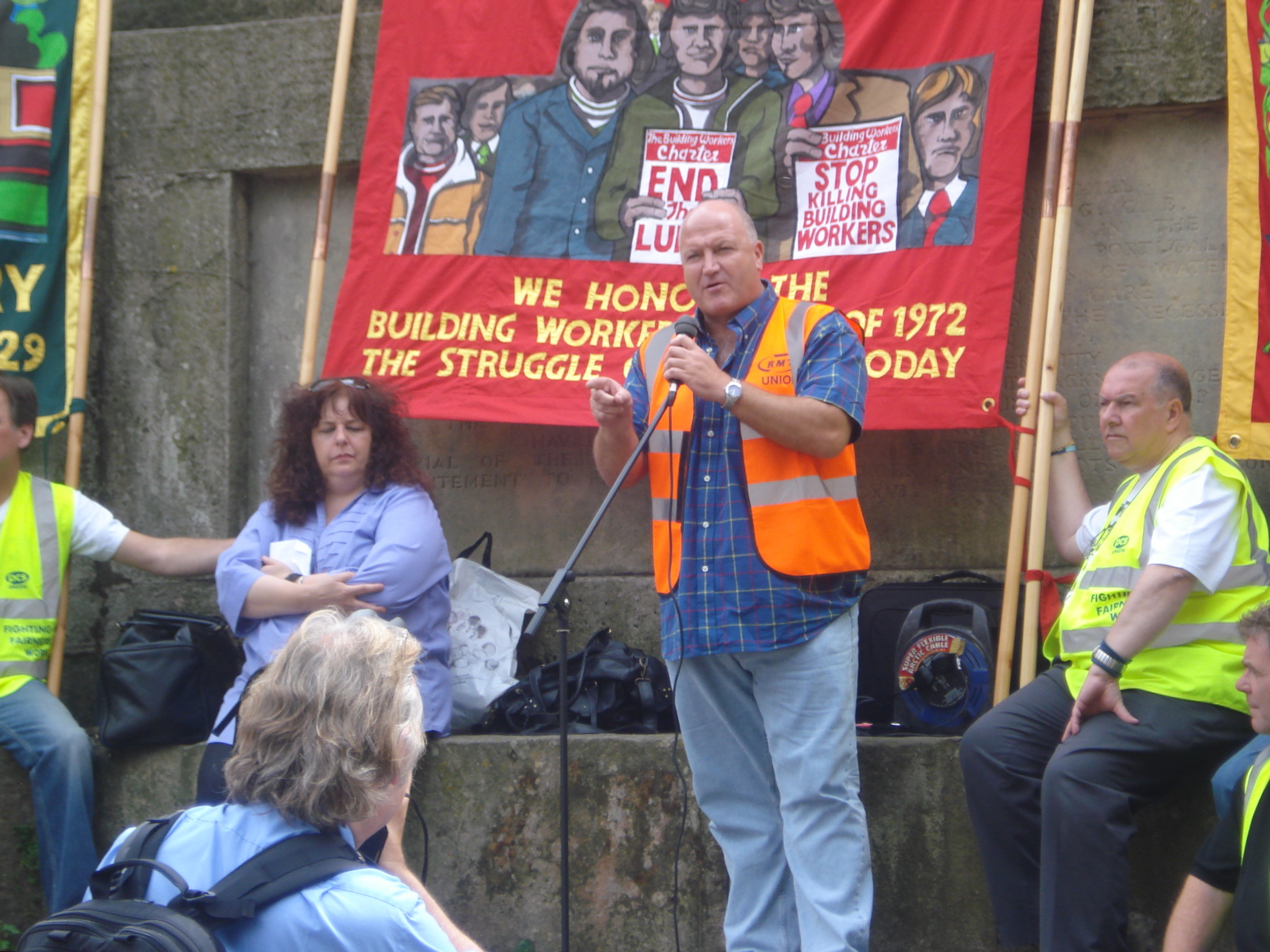 Bob Crow speaking at the annual Shrewsbury march in July 2010. Bob is the General Secretary of the RMT and is currently

leading industrial action and is an avid supporter of our fight for justice.

An Article From The Publication Docklands 24

UNION leader Bob Crow today said his members are fully prepared to strike again if their
demands are not met.

The RMT and TSSA walkout ended on Tuesday evening after a day of disruption on virtually the entire London Underground network.

The unions insisted they would not accept planned job cuts of 800 staff that would see stations under-manned and unsafe.

And RMT general secretary Crow believes he has ‘ratcheted up’ the pressure on London Mayor Boris Johnson to back down.

He said: “RMT and TSSA members have shown through their solid support for this week’s strike action, and the indefinite overtime ban that they will not sit idly by while staffing levels are hacked to the bone and management turn the tube system into a death trap through their dash for cuts.

“LU bosses have admitted through the course of the strike that there are far worse cuts to come this autumn and we already have examples of fleet and track maintenance schedules being ripped apart.”

The union says it will strike again, with maintenance workers due to walk out for 24 hours at 5pm on October 3, followed by drivers, station staff and signallers at 9pm.

London Underground says it is not prepared to cave in to union demands and insists London kept moving in spite of the strike, with 40 per cent of services running during key times.

My name is Artemis. I’m a 38 Degrees member and I live in London. Like all Londoners, I depend on the emergency services to keep my family safe. But Boris Johnson wants to close my local fire station along with nine others, including yours.

I can’t let this happen. So I’ve started a campaign to save them, but there’s not much time.
The London Fire and Emergency Planning Authority (LFEPA) decide what happens to London’s fire service. And yesterday they voted against Boris’ closure plans, for the second time this year.

The last time they voted to defy Boris, he threatened to sue to get his own way. If he does the same again, we could lose our fire stations. But there’s hope. Boris has said that he’ll stand for a third term as mayor if that’s what people want. [2] He needs our votes. So if he knows how strongly we feel about fire station closures, he might be persuaded to keep them open.

Our firefighters are an important part of the local community. They do more than fight fires. They assess risks in our homes, cut us out of our cars if we have an accident and hold crucial local knowledge that will be lost through the closures.

We need Boris to accept LFEPA’s decision this time. If enough people sign my petition, he’ll know that if we lose our fire stations, he’ll lose votes at the next election. He’ll think twice before he overrules the professionals once again.

Six of the ten stations faced with closure are Grade 2 listed buildings – and a 7th is just behind Harrods. These are historic locations in the heart of London. If Boris sells them, we’ll lose them forever. He’s flogging our family silver. But if enough of us join together we can pour cold water on Boris’ plans.

Help save London’s fire stations by signing the petition now:

Thanks for all your support,