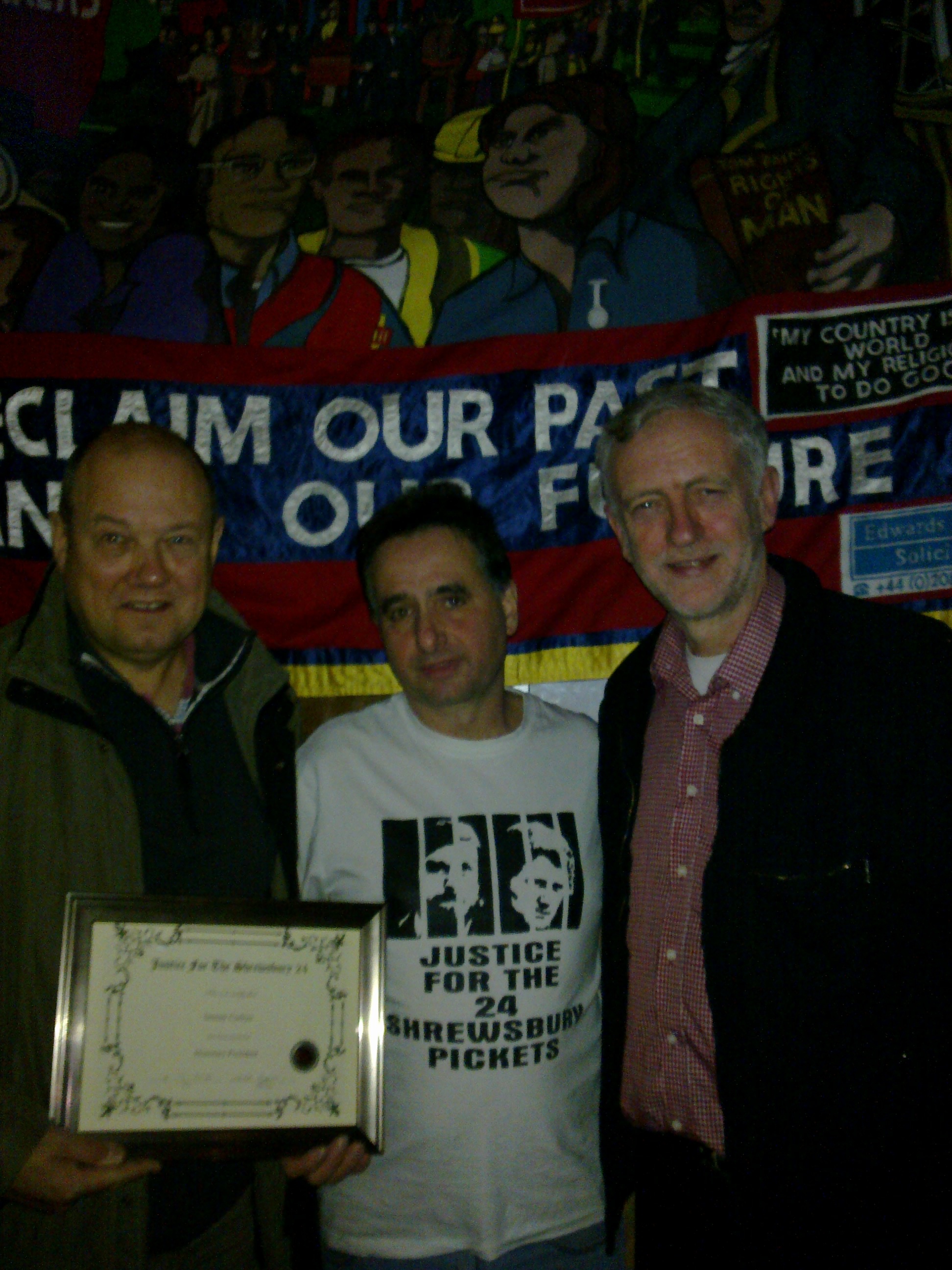 Mick Gilgunn (centre) (Editor – Politics section), Jeremy Corbyn MP (right)
and a representative from the RMT (left) at our benefit do on Dec 4th
2010 in London

Time to kick ‘New Labour’ in the long grass….. the concept of New Labour, the Mandelson and Blair Project was a revisionist vision to
abandon the working class, keep the unions at a distance and to make new friends in big business and the city… it was a root less
project that stole the soul out of the Labour Party and disenfranchised our heartlands. Time for change….. defend our welfare state,
NHS and public services.

A DESIGN FOR LIFE

From the cradle to the Grave

“Libraries gave us power” are the opening lyrics to the Rock band, The Manic Street Preachers 1996 hit record, A Design for Life.
Inspired from the words above the door entrance of Pillgwenlly Library, Newport Wales that reads, “Knowledge is Power”.
The song, almost an anthem for many, as songwriter Nicky Wire explains is about “class solidarity, a sense of community, the Welfare
state that gave us a sense of pride and dignity.”

The band itself emerged as teenagers, from Blackwood; a one time mining Town in Wales, torn apart from the 1984-85 miners strike.
Blackwood, like Newport, has a radical history dating back to the chartists in the 1840’s with a statue and a newly built bridge,
Chartist bridge commerating this past.

If the heartbreak of the miners strike was bad enough for their community, the band like almost all rock bands had their episode of
tragedy, when in February 1995 the bands guitarist Richey Edwards’s car was found abandoned on the Clifton Bridge. Missing for
the past 15 years, now assumed dead.

Just as the band was to call it a day after Ritchie’s disappearance, they were about to embark in chart success with their own
radical political and historical manifesto. Songs that were influenced from fighting fascism in the Spanish Civil War, to Let Paul Robeson
sing about the McCarthy witch-hunt of the artist and civil right activist. The band is credited to supporting exhibitions on both the
above subjects. They also performed in Cuba, meet Castro and their 5th studio album “This is my truth tell me yours” is a quotation
taken from a speech by Aneurin Bevan. Not bad for a pop group.

Bevan himself, the founding Labour minister of the NHS wrote a book entitled “In place of fear” Fear from rogue renting landlords,
the means test, slum housing and poverty-stricken diseases such as T.B. With this background laid the foundations of the
Welfare State. A progressive and liberating programme of extending municipalisation, a heath Service free at the point of need,
national insurance and pensions, social care, education, and a council house building programme replacing many of the cities
squalid overcrowded dwellings. A programme of nationalised industries that provided a base for manufacturing, therefore creating
full employment, with Government sponsored apprenticeships, and for the fist time further education for many not the few.

The Con-Dem Coalition Government Comprehensive spending Review announced on 20th October is a full frontal attack on the
foundation of the Welfare State and is ideologically driven to cut back on Public Services, with more to follow that will, if we do
not fight back, cut deep into frontline services and undermine all that post war Britain has achieved in social reform since 1945.
David Cameron who has no mandate from the people in a hung Parliament declared from a press conference soon after he took
office “that we are all in this together” To add insult to our intelligence he chose this meeting at the Open University complex
in Milton Keynes, the very concept that was created by the Wilson Government of the1960’s and 70, s.Further Education as
we have seen with the announcement of huge tuition fees will be under attack, undermining education for all. The Libraries
themselves that once “gave us power” are seen as easy targets in the cuts. Many see this new Government as “Trojan horse”
for Thacherite polices of rolling back the state, resulting in redundancies and a privatisation agenda with marketisation the answer
for all our cures.

But all is not doom. The marvellous recent campaign in Islington by the Defend the Whittington Hospital Coalition shows
what people coming together in a broad campaign to defend the A&E and maternity departments from closure can achieve.
This threatened closure from a hospital that has just been modernised really energised people into action. Public meetings and
a colourful march back in February of 5,000 people, some of whom had never marched before fronted by an open bus with
a lively jazz band. We marched from Highbury Fields to the Whittington Hospital with a rally of defiance. People power, a media
campaign and the Government stand off saved the hospital from part closure. The Defend Whittington Coalition in an act of
solidarity booked a coach to Hinchbrooke Hospital in Cambridgeshire during the summer to join the protest to save this General
Hospital from closing and reopening as a Privatised Hospital. If plans go ahead this will be the first NHS hospital to be sold off
lock, stock and barrel. That is why it is important to mobilise and link up with campaigns up and down the country.

Islington Trades Union Council supported by defend the Whittington Hospital Coalition and the Right to work campaign have
come together, held meetings with the wider community to form an anti cuts campaign called Islington-Hands off our Public
Services. A successful public meeting was held on 5th October in which an on going campaign is to be organised reaching
out to community groups, and users of public services to campaign against such cut backs from surfacing throughout North
London. The new Labour administration of Islington council is involved with consultation with local unions on how to prevent
redundancies or cuts in services whilst they and all other councils will try to balance a cut budget. This inevitably will lead to
much friction as services and jobs may be cutback. But to the councils credit Islington have been the first Labour council to sign
up to Defend Council Housings new manifesto, and are reaching out to the community in a Fairness commission with local
concerns being raised like the inequalities in the borough and seeking solutions.

Nationally the media seem to be in a frenzy, siding up to Coalition politicians, almost as if the cutback in public services is
inevitable and we should all accept the outcome. Mean- while the Globalisation of the banks who got us into this mess and
corporate greed are never questioned. As for corporate Tax avoidance, the Vodaphone Tax swindle costing Her Majesty’s
Inspectors £6 Billion Tax dodge goes unnoticed in the Tory Press. In Europe and America austerity measures are leading the
way to wider inequalities. Here in Britain the Con –Dems attack on housing benefits, security of tenancy agreements being
ripped up, 60% of housing budget cut, and social housing rents to be pitched at 80% of market rents in an unregulated
Private sector, is a clear sign if ever there was a one, that this Tory led Government have declared war on working class people.

As for the coalition, The Liberal Democrats have ditched their most radical of policies to not renew the Trident missile and
have back tracked over student tuition fees. We all remember the spitting image caricature of David Steel saying to the Lib-Dem
conference “Go back to your constituencies and prepare for Government” But now while they clench onto power for the
first time since the old Liberal party under Lloyd George they must emerge as part of a Tory led manifesto, (with their new free
market ideology of the orange book) or be drowned by it. The hung parliament might just hang itself, but it is the damage
it could do in the meantime. But Social history will always teach us lessons in fighting back………..

One such example was an elderly woman, Celia Wilmot who died almost 15 years ago, but was an inspiration to me and whose
childhood experiences epitomise reasons as to why we should have a welfare State and a cohesive society based on a collective
concept with social care, and not one of poverty and war.

Celia was two when her Father died at the battle of the Somme in 1916. She was raised in Govent Garden in slum dwellings,
where her young widowed Mother would take her then 5 year old daughter along with her, leafleting door to door campaigning
about war pensions for widows, fair rents, and questioning the home fit for heroes. In Later life Celia marched against Mosley’s
fascists, became a shop Stewart in the clerical section of the Fleet Street unions, and by the time I meet her in the late
1980s in Pimlico Labour party, she was in the pensioners movement and was campaigning against Shirley Porter the Westminster
Tory Council leader, and the infamous “homes for votes scandal” in designated House sales programme (a policy of for selling
off of council housing stock in Westminster council)

There are people like Celia, her husband Les who was involved with the tenant’s movement, and Celia’s Mother, the world
over. Who generation after generation, fought for a better quality of life. If she were alive today she would be forming a
committee to prevent such a Government wrecking everything that we hold dear to us…another world is Possible, if only
we fight for it!

Bailed out banks will avoid paying £19 billion in tax on future profits by offsetting their losses during the financial crisis against
their tax bills, it is being claimed.

The TUC says the lost money is equivalent to more than £1100 for every family in the country.

They benefited from £850 billion bailout from the taxpayers and the Bank of England during the recession, and could offset
their £19 billion of losses between 2007 and 2009 against tax on future profits, shows a report commissioned by the union.

General Secretary Brendan Barber said, ‘Banks caused the global financial crash and triggered the recession that produced
the deficit. Yet, not only did they take nearly a trillion pounds from taxpayers to bail them out, they are now using
the losses caused by their irresponsibility to cut their tax bills for years to come. He declared the governments’ bank levy
‘small change’ as the ‘business-as-usual bonus levels’ show. It’s double bubble for the banks, but huge cuts, job losses and
VAT increases for ordinary families,’ he added.

Small firms had every right to be angry. ‘Not only are they finding it hard to get credit from the banks, soon they will be
paying more tax on their profits than the banks,’ said Mr Barber.

TUC deputy general secretary Frances O’Grady today insists that bank taxes are ‘an alternative to austerity, to cuts,
and to draconian welfare reforms’.

A Robin Hood Tax on financial transactions could raise £20 billion in the UK alone,’ she will say.

Malcolm Davies (Shrewsbury 24 editor) added to the article by saying ‘No banks should be paying a bonus until the banks
takes complete ownership of itself again’. This year the bankers are getting £7 billion bonuses, which equates to £3.5 billion
after tax. This amount of £3.5 billion should be handed over to provide essential services from being cut. No normal working
man/woman can go to the bookies and gamble other peoples’ money, so why should the banks be allowed to get away with it?’