I am the Secretary for the London Shrewsbury Defence Committee and I will be writing up on the Women in Trade Unions section of the website. Historically I have worked in manufacturing, catering and hospitality environments. My current post is within local Government in which I have been employed for 10 years, firstly as an unqualified member of staff and then as a qualified social worker and since Feb 2009, I have been in post as a Senior Practitioner.

My values drive my commitment to both my job and seeking justice for causes that I support such as the Shrewsbury Pickets.

The Cost of Working

In 2001 I became a Local Authority employee and felt secure in the belief that I had a job for life and my career was secure, as many others did. However, this was not the case and in 2008 the authority that I was employed within began to ‘restructure’ in order to make efficiencies
and part of those efficiencies were to make personnel redundant and to reduce wages, which was, in my case to a level that was unsustainable. Due to this, changes in my life and having a good understanding of the economic climate in 2008 I decided to travel south and became self employed. I  travelled to gain work as many migrant workers do leaving my home in the
north through necessity. On a personal note I miss my northern home, to wake up overlooking fields and be surrounded by a warm community spirit is a sharp contrast to the world of working in London whereby each attempt to interact is viewed with suspicion and people are contained within their insular lives and you become one of a million and a nobody to most.

Life in London also has its benefits as it is a city whereby all tastes are catered for, beautiful architecture, art and history exist everywhere and the culture is rich but the life is fast and hectic requiring an immense amount of energy to keep up and for this reason I do not envision retiring here.

This year, after a successful interview I decided to accept a permanent managerial position however, have soon realised that this was a financial error and to be honest this has saddened me that due to the cost of living I am, as in 2008 still not able to exist on a local authority wage and will have to return to the world of self employment. Self employment, as we know
is a world of risks and lacks security however at the age of 42 and with many qualifications including a degree why am I expected to accept a wage that merely pays the bills?
I am a professional 42-year old woman who has studied whilst working and raising a family of 3 single handed and now, at a time that my children have left home should I not be able to access life? The answer for myself, at this current time, is no and what angers me is why society has been left to get in this state by two governments?
I also feel extremely let down by Government which continually fails to listen to society; I have struggled to raise children whilst studying and held down a full time job. I have been proactive with regard to improving myself and increasing my chances of gaining employment but where are the jobs that have a realistic wage attached to them when utility and food costs spiral out of proportion not paralleled by wages or in line with inflation.
For this reason I am not ashamed to say I will, again, be joining the self employed within this country as I am unable to accept anything else, as there are no better offers on the table. 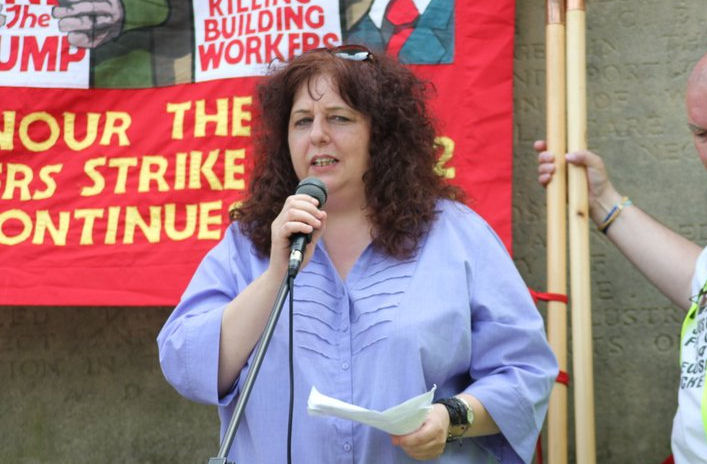 Janice Godrich speaking at the annual Shrewsbury march in July 2010.
Janice is the PCS President and is a supporter of our campaign.

A Short Profile Of Janice Godrich

Janice Godrich is the President of the UK Public and Commercial Services (PCS) Trade Union.
The PCS is the 5th largest union in the UK. Janice is one of, if not the, youngest national president of a large UK trade union. She was first elected in 2002 at the age of 39.
She has stood for annual election of the union’s 350,000 membership on an individual vote basis since then and has been re elected with a clear majority from 2002 to 2007.

She has stood as an open socialist from her first election. As have her colleagues who have formed the majority of the PCS national executive. Janice offered her home as security in a legal case to uphold members’ election of General Secretary.

Alongside the outstanding socialist general secretary, Mark Serworka, they have formed a bright and refreshing political alternative to the staid and conformist safeguard of the British TUC.

Something amazing happened just now. The Bank of England, one of the country’s oldest institutions, listened to the voices of 35,000 people — it changed its plans not to feature any women on banknotes and announced they will put Jane Austen on the next ten pound note.

It happened because three months ago Caroline Criado-Perez read that the Bank intended to replace the only historical woman on banknotes. Caroline was outraged and said she “couldn’t let another decision that airbrushed women out of history pass without challenge.”  So she went to Change.org and started a petition.

That day she shared the petition with everyone she knew on Twitter and Facebook and asked them to pass it on.

They did! Within days 15,000 people had signed — but that was just the beginning. Journalists got in touch and her campaign was featured in The Guardian, The Telegraph and on BBC News. MPs backed the campaign and a top lawyer even offered help.

More than 35,000 people signed and with this people-powered support behind her, Caroline delivered her petition to the Bank. Its Head of Notes agreed to a personal meeting with Caroline and the rest is history.

It all started with a petition. Inspired?

Start your own petition today. It only takes three minutes.

If you’re not quite ready to start your own petition yet check out the petitions that are taking off on Change.org right now and sign the one you want to win.

Katherine and the Change.org UK team